See what people are saying about Nickel from Nicole on Facebook!!!

One of the other drivers that day was Nicole’s classmate and friend Lance.  Lance watched the tragedy unfold as the car he was driving was passed, and seconds later witness to the fatal crash.  In the days that followed, Lance wrote a letter to Nicole’s family talking about how he’d first met Nicole and how they would hang out in the same group etc.  He wrote how special her friendship was to him and how he thought it was cute how Nicole would nickname her friends with a "y" at the end of their names (Lance was Lancey).

Always the nicknamer, but without a nickname of her own; Lance wrote, in the aftermath, how he was going to nickname Nicole, "Nickel" (her initials were NKL). Lance continued to write how he taped a Nickel to the dashboard of his car as a constant reminder for himself to drive safely - knowing now, the extent of the consequences of not doing so.  His final thought was that Nicole's death would save many others...

Nicole's family was deeply touched by Lance's letter and wondered... "If Lance is going to place a Nickel on the dashboard of his car to always remind himself to drive safely, do you think we could get other teenage drivers to do the same?"  You betcha!!!  The non-profit "Nickel from Nicole" was born.  A 501(c)3 whose mission is to promote save driving to new teenage drivers, and the parents of.

To help with the messaging and distribution of Nickels, a Nickel Card was created.  Easy to read, yet very impactful;  A beaming picture of Nicole in sharp contrast to a photo of the wreckage; The tragic headlines from the newspaper countered by a brief description of Nicole's aspiring life; A self-adhered Nickel is attached, with the instructions to peel off and attach to the recipient's dashboard.  Lance's letter, that inspired it all, is printed on the back.

It was birthday season.  It seemed like every week there was another one of Nicole’s friends turning 16.  On the afternoon of July 8, 2010 Nicole (16) would be picked up at home by her girlfriend (16) to be driven to their classmate/friend’s 16th birthday celebration.  There would be five cars in all, each with two classmates per car, traveling together across town (~6 miles).  The caravan was to enter State Highway 121 for a short jaunt, to meet up with the parents just two exits away.  The caravan would never make it to their destination…  Upon entering the highway, the driver of Nicole’s car, overcome with competitiveness and showmanship, sped forward trying to pass all of the other cars in the caravan ahead of her.  Recklessly weaving through the normal flow of traffic, the driver ultimately used the emergency lane as a passing lane.  The highway cameras showed the car, unopposed, traveling in excess of 101 MPH before losing control in the down pour rainy conditions; slamming head-on, on the passenger side, into a large signage pole in the center median.  Nicole was killed instantly, the driver survived with minor injuries.  No drugs, no alcohol, no texting contributed to the horrific accident, but the driver’s inexperience, poor decision making, and reckless behavior did.  The driver’s senseless actions took the life of her best friend – preventable by all measures.

The objective of Nickel from Nicole is simple: To get other teenagers (and adults) to place a "Nickel" on their dashboard as a constant reminder to drive safely.

Our hope is that you will participate individually.  Our dream, in honor of Nicole, is that you will take the initiative to encourage your family, friends, neighbors, school, church, youth group, team, city & state to do the same.  It all begins with you.

To date, hundreds of thousands of Nickel Cards have been assembled and shipped around the world to fulfill requests to participate!

That's hundreds of thousands of drivers being reminded to drive safely by the Nickel they chose to display on their dashboard.

Thank you for your support.

The impact Nickel From Nicole will have on saving lives can never be measured, however, one dad's perspective is spot on;

"What a great tribute to Nicole! I've got a nickel in all the cars Danny drives now, I hope it gives him pause each time he gets behind the wheel. I know it will for me." 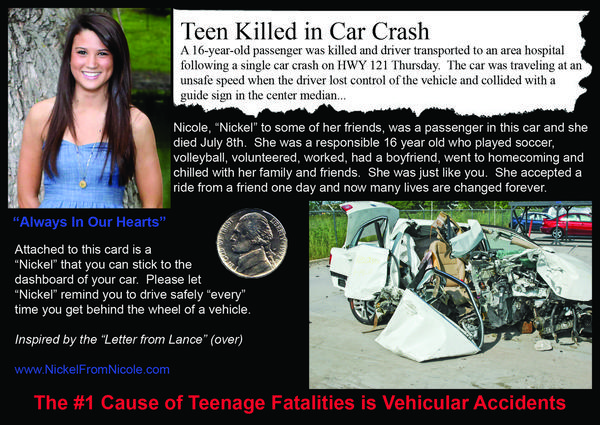 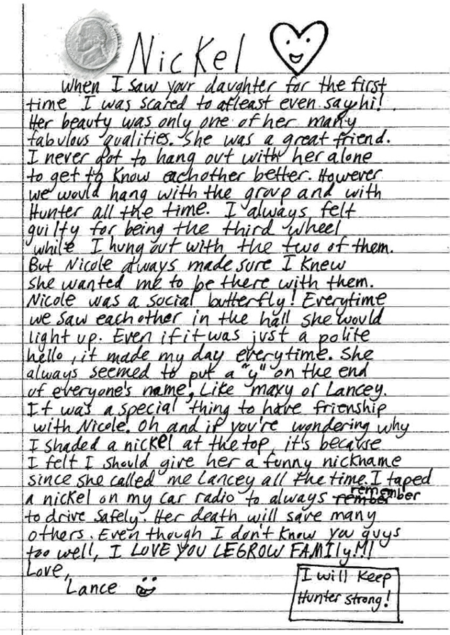